The USC Trojans finally jumped up spots and won against the Utah Utes which was very much required at the time for the USC Trojans.

The match between the two qualified teams took place on Friday when USC finally regained its form and jumped 14 spots in CBS Sports. The match took place at the Los Angeles Memorial Coliseum on Friday.

Before the match, the Utah Utes were ranked at the 10th spot which was changed after USC Trojans won the match against them. USC Trojans were again led to lifting the trophy by the backup quarterback.

This happened for the second time this season that they were led to victory using the quarterback. Kedon Slovis who had replaced JT Daniels in the team this year itself had to suffer an unfortunate injury during the game.

The USC Trojans were way back in the rankings when it came to winning the game. Their win against Utes led them to jump an extra mile in the rankings. They achieved the 21st rank in the AP poll of the top 25.

Not only this, but they have also managed to come under the rankings of CBS Sports 130. The USC Trojans were back in the rankings but this single win led them to jump a whopping 14 rankings and now they are at the 21st rank in there too.

The head coach of the football team, Clay Helton was extremely overwhelmed by the performance of the team topped up with their victory. He was fired upon the boys and expressed his happiness clearly to the public. 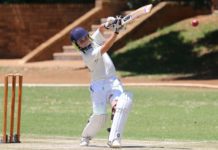