WWE has recently announced that the undefeated Tyson Fury will be appearing on Monday’s RAW from the Rabobank Arena in Bakersfield, California, and they will be offering him a live mic.

As noted, Fury was at the Staples Center in Los Angeles to watch Friday’s SmackDown FOX premiere & Twentieth Anniversary special from the ringside,

and also was later involved in a friendly but tense showdown with Braun Strowman during the 8-man match that saw Strowman, The Miz and the Heavy Machinery defeat the team of WWE United States Champion AJ Styles, The Viper Randy Orton, and RAW Tag Team Champion’s Dolph Ziggler & Robert Roode.

The tension continued until Tyson Fury hopped the barrier and tried to mix it up with The big Monster Among the Men until the security got involved between them.

WWE is teasing that Tyson Fury may accept a challenge from Strowman during Monday’s RAW segment.

Above is the video from the SmackDown segment with Tyson Fury, and below is WWE’s full announcement on the segment which is scheduled for Monday in Sacramento:

WWE to offer Fury an open microphone this Monday night on WWE Raw.

After clinching the eight-man tag team victory, Brawn Strowman taunted undefeated professional boxer, Fury, to meet him in the ring.

WWE is offering Fury an open microphone… so, what could possibly go wrong???

After hopping the guardrail this past Friday Night on SmackDown in an attempt to confront Braun Strowman, the always controversial Tyson Fury will now be offered an open forum this Monday night on WWE Raw to speak his mind following the explosive incident that saw a small army of a security struggle to keep him from getting in the ring to mix it up with The Monster Among Men, Braun Strowman.

Tune in this Monday night at 8/7 C on USA Network to see if Tyson Fury accepts! 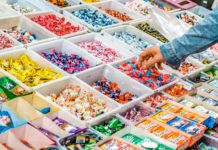 Aussie fighter brutalized in horror start to UFC 243- Why it is ‘Hard to watch’: fight?